How to get to Mount Teide by bus

If you’re wondering how to get to Mount Teide by bus or public transport and have tried a Google search, we’ve got good and bad news for you.

N.B. Certain information in this post may have been subject to change.

This year (2020), public transport timetables in the Canary Islands have been amended temporarily following the end of the state of alert. Updated timetables can be consulted on the www.titsa.com website, by telephoning the Titsa Customer Service department on +34 922 53 13 00, or on the company’s social networks.

First, the bad news (so we can end on a good note!): your only option for travelling to Teide by bus or public transport is to take one of the two buses that go to the National Park every day.

That’s right, there are just two buses: a bus to Mount Teide from Puerto de la Cruz and another from Costa Adeje.

Now the good news: if you’re organised, you can catch one of these two buses at a bus stop along their routes. However, if you’d prefer to travel to the volcano without using a car, why not join one of our excursions that include transport for small groups from your accommodation? You’ll be contributing to a sustainable Mount Teide and won’t have to visit on an overcrowded regular excursion.

Essentially, if you want to get to the National Park, you’ll get there one way or another!

Let’s take a closer look at the different options.

Travelling around Tenerife and to Teide by public transport

The Mount Teide bus no. 348 leaves every day at 9.15am. This bus to Mount Teide from Puerto de la Cruz sets off for Las Cañadas del Teide. It stops in La Orotava, Montaña Blanca and at the cable car base station (among other stops). The journey takes just over 1 1/2 hours.

The return bus departs at 4.05pm from the cable car base station and follows the same route in reverse.

Also every day, the no. 342 bus to Teide leaves Costa Adeje (Playa de las Américas) at 9.00am and travels to Las Cañadas del Teide—this route takes 2 1/4 hours. Stops along the way include Los Cristianos, Teide cable car (the return bus departs from this stop at 3.40pm) and Montaña Blanca.

So there are just two buses a day, one from each zone of the island—if your accommodation isn’t on one of the two bus routes, you’ll have to travel to a bus stop along the routes. You’ll have to make sure you’re there at the right time too because each bus runs just once a day (up and down the volcano). 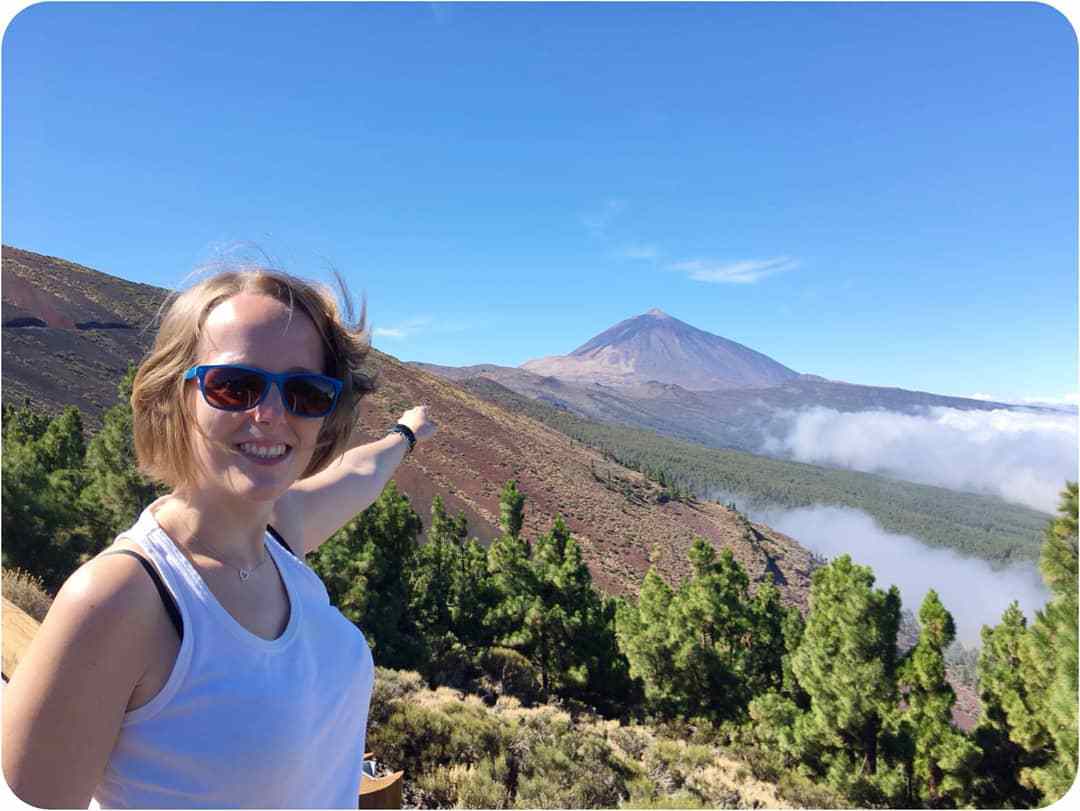 About the bus to Teide

There are a few important things to know about travelling to Mount Teide by bus:

If you’d like to know a little more, including options for travelling to Mount Teide by car, take a look at our article on the different options for reaching the cable car.

Let’s take a closer look at the good news we mentioned earlier: there are different ways to travel to Mount Teide without having to go by car or use public transport. There are only two routes to Teide by bus and they might not be suitable depending on where you’re staying and the timetable, because there are only two return buses a day (one in the north and the other in the south).

An easier option might be to choose one of the Volcano Teide experiences which include return transport from your accommodation.

Here’s a quick look at four of these experiences, so you can decide if they’re for you:

This day excursion for small groups with an official guide includes tickets for the cable car. When you reach the National Park you’ll enjoy a wonderful ride up the slopes of the volcano before setting off along one of the free access trails from La Rambleta: the trail that leads to the Pico Viejo viewpoint and the trail that takes you to La Fortaleza.

Spectacular panoramic views are waiting for you at the end of both trails. From the Pico Viejo viewpoint you can see the island of La Gomera and, further away across the vast Atlantic Ocean, the islands of El Hierro and La Palma.

Views from La Fortaleza are equally impressive: you can look out over the north of the island with Anaga at its tip and across the ocean to the Atlantic horizon.

Here’s a quick summary of this experience:

If you liked it, you can find full details about the experience here:

This excursion also takes you right from your accommodation to the National Park in a small group, but this time you’ll head to the largest solar observatory in the world.

You’ll explore the observatory with a guide who will share fascinating facts about the centre with you and explain how a professional telescope works. You’ll also take part in an astrophysics workshop and finish by enjoying a daytime observation with portable solar telescopes.

Does it look tempting? See further information by clicking here:

Travelling to Mount Teide by bus at sunset is literally impossible.

Instead, this 2 in 1 Mount Teide excursion for astronomy lovers gives you the chance to enjoy the volcano as the sun goes down with a guided visit to Teide Observatory followed by stargazing.

During the afternoon visit to the Observatory you’ll also see a professional telescope, hear about the projects that the scientists at this world-famous centre are currently working on, take part in a brief astrophysics workshop and observe the Sun through portable telescopes.

At the end, you’ll go stargazing with long-range telescopes and Starlight guides. If you think you’ve seen starry skies before, just wait till you see the skies above Mount Teide: did you know that from here you can see 83 of the 88 known constellations?

Take a look at this experience:

If you’d like to visit Mount Teide at sunset and enjoy both its observatory and its skies, here’s the experience in full:

The fourth and final excursion on our list is definitely the most comprehensive and exclusive way to see the sunset and stars.

It takes place at sunset and night, but this time you’ll ride the cable car up to La Rambleta outside of its normal operating times with a maximum of 90 other passengers.

From there you’ll set off on the fascinating trail to the Pico Viejo viewpoint to watch the sun go down. You’ll see the shadow of Mount Teide fall across the Atlantic with Gran Canaria on the horizon, and then watch the sunset with the islands of La Gomera, El Hierro and La Palma in the distance. The spectacular range of colours in the old crater, once a lava lake, will take your breath away as you watch night fall in the National Park, a UNESCO World Heritage Site.

And the experience doesn’t stop there! Next, you’ll head to the Teleférico del Teide Restaurant to enjoy a menu that features local recipes and includes some of the most typical dishes and foods of the Canary Islands.

After dinner it’s time for stargazing with long-range telescopes in the company of Starlight guides who will reveal everything there is to know about one of the three best skies in the world, together with Chile and Hawaii.

Here is a graphic example so you can see what Sunset & Stars is all about:

Compare excursions at a glance

We’ve explained how to get to Teide by bus and a few alternatives for travelling to the volcano during the day and night. By choosing one of the modes of transport we’ve described instead of travelling by car, you’ll also contribute to the sustainability of the National Park. Are you a #teidelover?

But Volcano Teide is this... And much more. We’ve produced these three documents to help you get organised and compare all the excursions we’ve created so you can enjoy the National Park. Take a look and plan your visit to the most emblematic destination in Tenerife.