Today we present detailed information about one of the most spectacular trails on the summit of Mount Teide: the route to the Pico Viejo Viewpoint.

Walking along the Teide National Park’s trail No. 12 you can observe:

Choose your guided tour to the Pico Viejo viewpoint

Points of interest on the trail to the Pico Viejo Viewpoint

You are probably wondering what are the must-see spots you should stop at if you choose to walk this path of great scenic and volcanological interest. The characteristic lava flows can be seen on this route, with the climax of the spectacular crater of Pico Viejo, 800 metres in diameter.

We explain everything there is to know about the 7 must-see stops you’ll want to do while you follow the route to the Pico Viejo Viewpoint on Mount Teide.

In addition, here you will find more options to enjoy this impressive route.

Stop 1 on the trail to Pico Viejo: caldera

This Teide route to the Pico Viejo Viewpoint offersa complementary view of the majestic Las Cañadas Caldera, so take your time to peacefully take it all in and enjoy the breathtaking views.

Did you know that the natural boundaries of the National Park are marked precisely by the edges of the caldera, which is an elliptical depression measuring 16 x 11 km, inside which the Teide stratovolcano was formed?

And do you know where the name of Las Cañadas comes from?

It comes from the plains that extend at the foot of the caldera’s wall, which were used as a cattle route (known as “cañada” in Spanish), and that were formed because lava prevented the waters that descended from the walls to find a way out, causing the materials carried by these waters to sediment and accumulate at the base.

Can you see the black lava inside the caldera to the far right? It corresponds to the eruption of the Narices del Teide (Teide’s Nostrils) craters of 1798 (No. 5). Indeed, the last historical eruption in this area!

In the distance in the south, if there aren’t many clouds (we refer to the phenomenon of Mare Nubium, or Sea of Clouds), you can see the coast with Montaña Roja (Red Mountain) to the left, the coast of Las Galletas and the profile of the great Guaza mountain near Los Cristianos.

And if weather conditions permit, from this point of interest on the route to the Pico Viejo Viewpoint you will be able to see the islands of La Gomera and El Hierro on the far right of the horizon.

Book your guided tour to the Pico Viejo Viewpoint

Stop 2 on the route to the Pico Viejo Viewpoint: an ancient crater

Can you see the whitish hill that extends to the left of the path at the very beginning of the trail to Pico Viejo?

It is a remnant of the ancient crater that existed before the last eruption of Teide! What do you think about that?

Did you know that all this light-coloured elevation is altered by hot, sulphurous fumes and water vapour from the fumaroles that you will encounter along the way?

You may like to know that from this place you can also enjoy your first glimpse of the rocky outer edges of the crater on the summit of Mount Teide.

Stop 3 on the trail to Pico Viejo: fumaroles

Check out the first curve just after leaving behind a long, straight stretch of the trail!

Here, you’ll have to make a stop and marvel at the fumaroles in the ground with white and yellow deposits or efflorescence.

Why do these fumaroles on the trail to the Pico Viejo viewpoint have this colour? It’s a result of the sublimation or direct change from gas to solid of some of the substances from vapours around fumaroles.

Take the camera and place your hand near a fumarole because you will want to make this warm moment last forever.

Book your guided tour to the Pico Viejo Viewpoint

Stop 4 on the route to Pico Viejo on Teide: crossing the Tie of Teide

At this point of the trail, where you have already felt the warmth from the fumaroles, you will now enjoy crossing the Tie of Teide.

After a weaving stretch of the route to the Pico Viejo Viewpoint you will reach a point where the path opens into a wider area, which will allow you to make out the outline of a huge light-coloured elevation.

This elevation, which can be seen from the distance from the trail to the Pico Viejo Viewpoint, is nothing more, and nothing less, than a section of the ancient crater of La Rambleta, which we have mentioned in this article in the paragraph about the second stop.

Look to the right now, and you will see below black lava overflowing a clearer surface, dividing it into two.

This black lava flow on the trail to the Pico Viejo Viewpoint is what we call the Tie of Teide.

You have probably already seen the Tie of Teide from the area of Roques de García or from the Parador, since this triangular spot below the summit is very characteristic.

Guided tour to the Pico Viejo Viewpoint: your options

Stop 5 on the trail to Pico Viejo: black lava flow with big rocks

Look at this picture to appreciate the views that can be seen from the fifth stop on the route to the Pico Viejo Viewpoint.

Number 1, the black lava flow with big rocks on this side of the trail corresponds to a smooth, almost vertical surface.

What is this smooth vertical surface on the trail?

It’s one of the inner walls of a lava channel which was later partially buried by a higher lava flow (No. 2 on the image below).

This second lava flow is wider and almost horizontal; it’s highlighted on the image below with No. 3.

Do you know what is the most stunning thing about this surface? Here, you can see various accretion balls (also known as Teide Eggs) that have most probably rolled down the slope.

Here is one interesting fact about these big accretion balls upon black lava flows on the route to the Pico Viejo Viewpoint: they are formed like snowballs; when the volcano expels solidified lava, rocks fall onto liquid lava which becomes attached to the rock causing it to grow gradually as it rolls down the slope.

Book your guided tour to the Pico Viejo Viewpoint now

Stop 6 on the route to Pico Viejo on Teide: La Gomera, El Hierro and La Palma

Now that you have seen the Teide Eggs at the previous stop, it’s time for you to take in the views that the route to the Pico Viejo Viewpoint offers of the neighbouring islands of La Gomera, El Hierro and La Palma.

From this point, just where the path opens into a wider area before it descends again, you will be able to catch sight of the last stretch of the trail and… you will enjoy your first glimpse of the spectacular multicoloured crater of Pico Viejo volcano!

You will probably see other people at the viewpoint opposite Pico Viejo (the furthest point on the image above).

Take a look at the people who are already there. They will serve as scale to appreciate the magnitude of these huge canals of viscous lava from the last eruption of Teide (on the left side of the image).

Did you know that the Pico Viejo viewpoint is situated right above one of these viscous lava flows?

If the weather is clear, beside the fantastic views of the Pico Viejo crater, you will be able to spot the Teno Massif to the right, the islands of La Gomera, El Hierro and La Palma on the horizon, and also the island of Gran Canaria to the left.

Imagine taking in this same scenery at dusk. At sunset, it acquires a truly remarkable array of colours, which are unforgettable to visitors. We explain how you can behold it in this article about the different options available to you to enjoy a guided tour to the Pico Viejo Viewpoint.

Stop 7 on the trail to Pico Viejo: the crater of Pico Viejo volcano

Once you reach the seventh stop, you will have completed the spectacular route to the Pico Viejo Viewpoint on Teide.

Did you know that the viewpoint situated at the end of the trail faces the majestic crater of Pico Viejo, 800 metres in diameter and 3,104 metres high?

To behold the extraordinary mix of colours of the Pico Viejo crater it is best to visit it when there’s no snow, and as early as possible.

This way you can appreciate its multicoloured mantle of pumice stone from the last eruptions in this area, mixed with grey materials expelled from a "funnel", 300 metres in diameter and 100 metres deep, located inside the crater of Pico Viejo.

And did you know that there was once a lava lake inside the crater of Pico Viejo?
Take a look inside the crater. Can you see the wide plain surface to the left (on the southern side)? This is the ancient lake of lava from which most of the flows poured out! Isn’t it amazing?

You are probably wondering what happened with the lava lake from the crater of Pico Viejo, aren’t you?

It could have drained after the volcanic activity had ceased and lava had ceded, filling back the canal.

We are only able to make an approximate reading of this process.

If you like stunning views, and you would like our guides to show you everything that we have just described on site, we recommend that you choose the guided tour to the Pico Viejo Viewpoint.

How about booking a date and time to take the cable car to enjoy this sensational trail?

Tags: Hiking, Teide Cable Car, What to do on Mt Teide 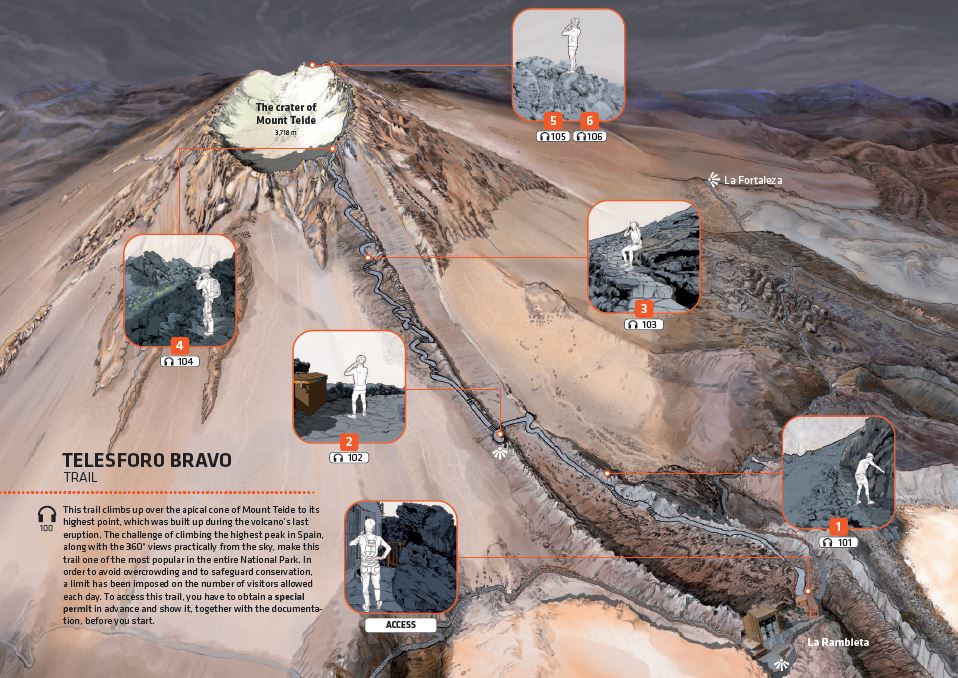 The Telesforo Bravo trail is one of the many wonderful trails you’ll find on Mount Teide—and it’s the most popular because whoever completes it ... 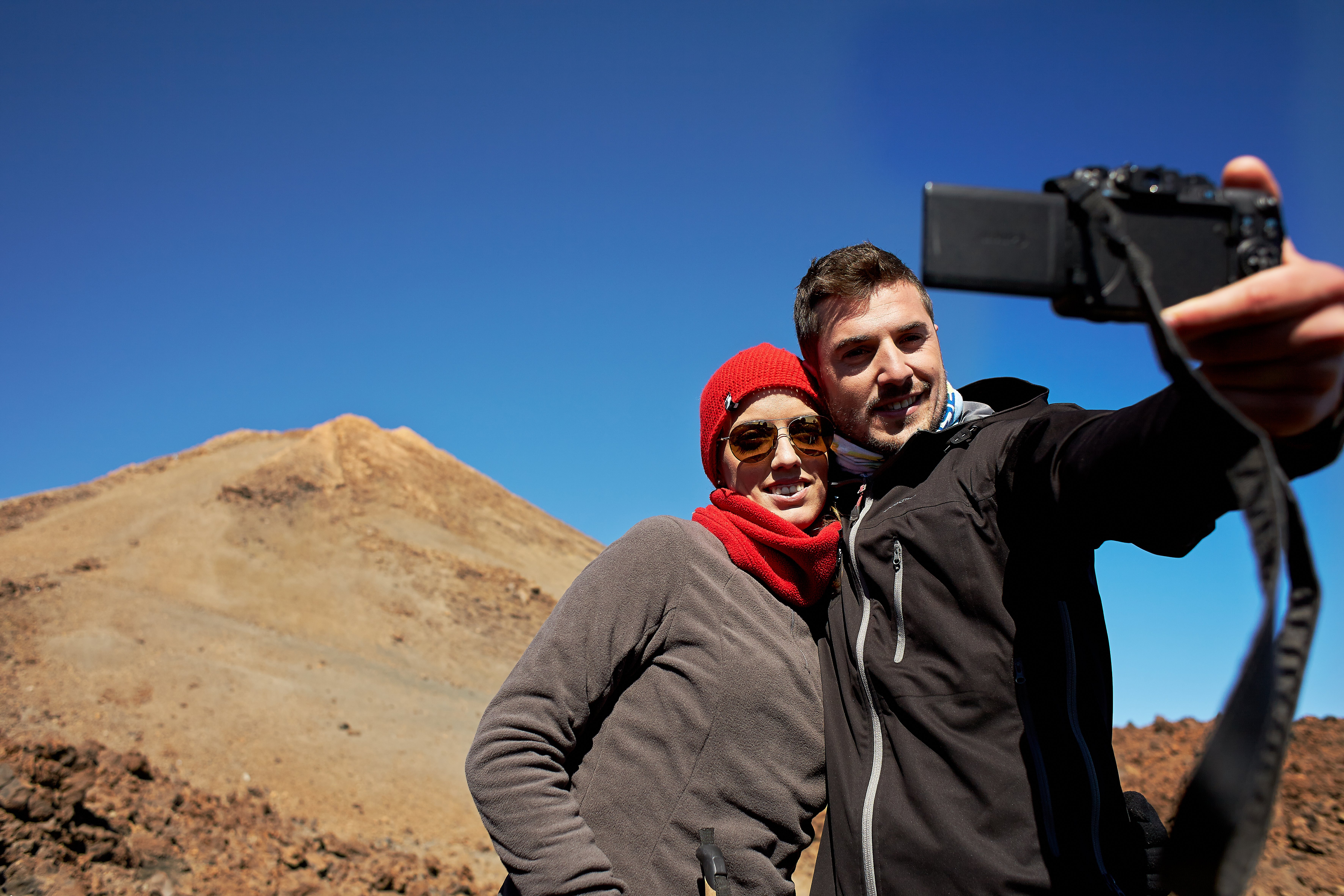 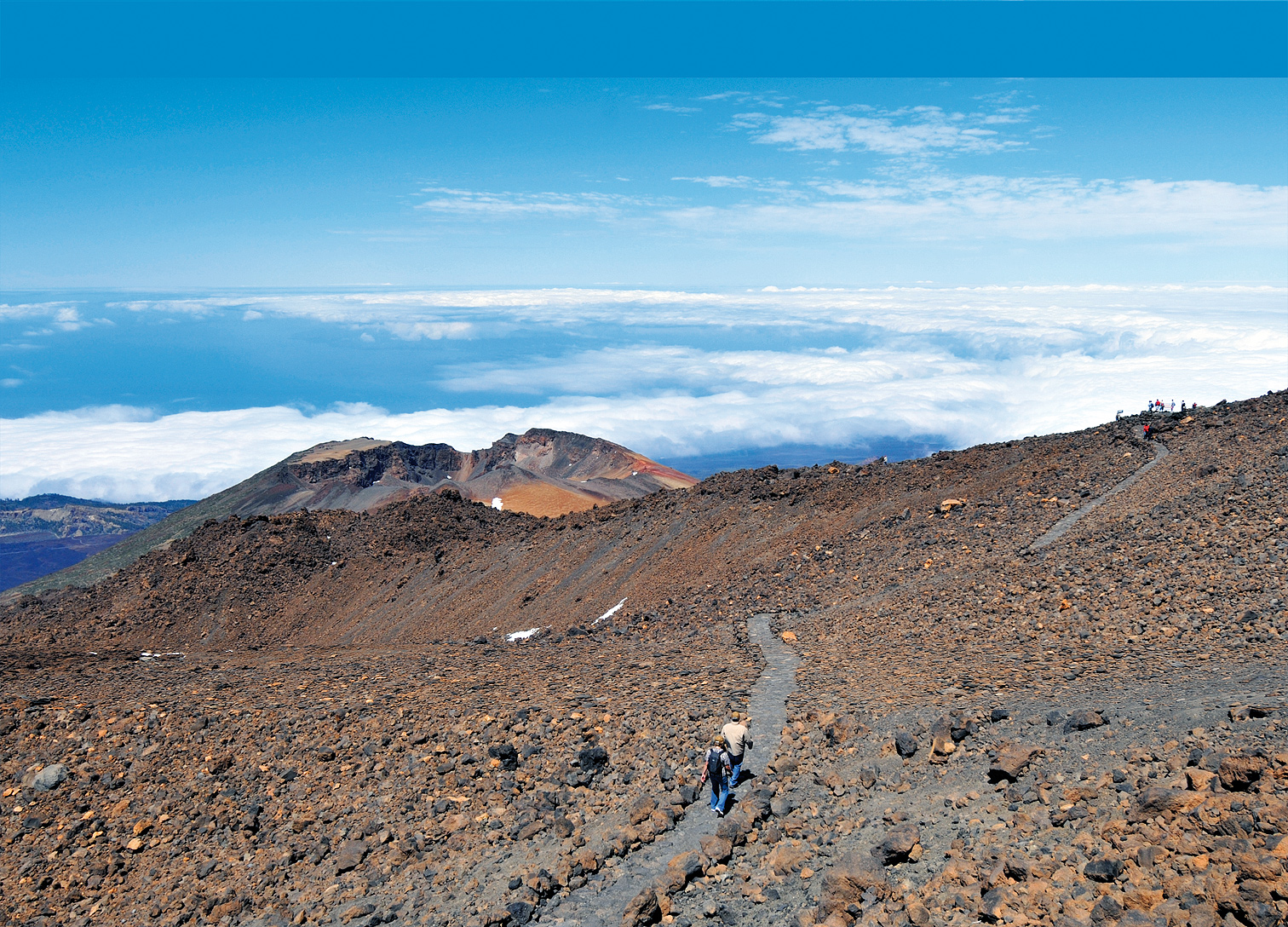 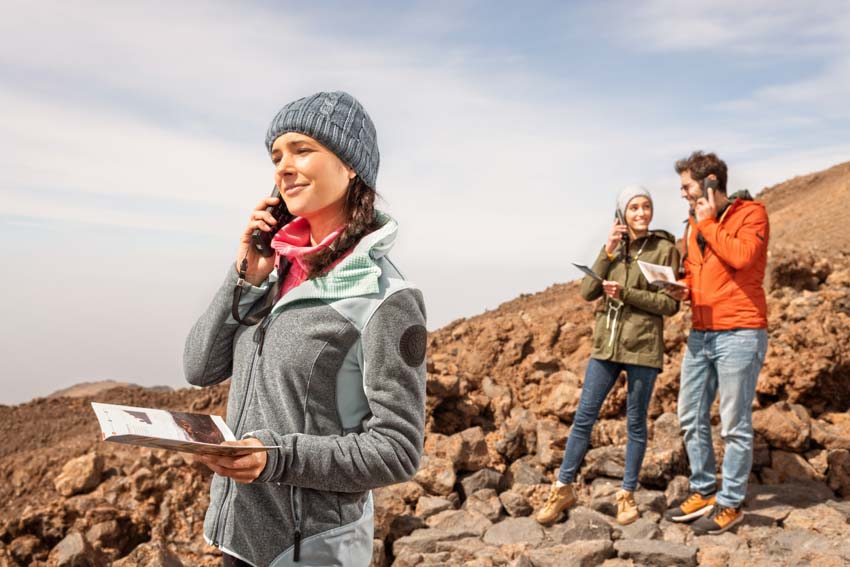 Tickets for the Teide Cable Car: with audio guide or trails guide

Did you know that the tickets for the Teide cable car have two complementary options for you to enjoy the volcano to the full? 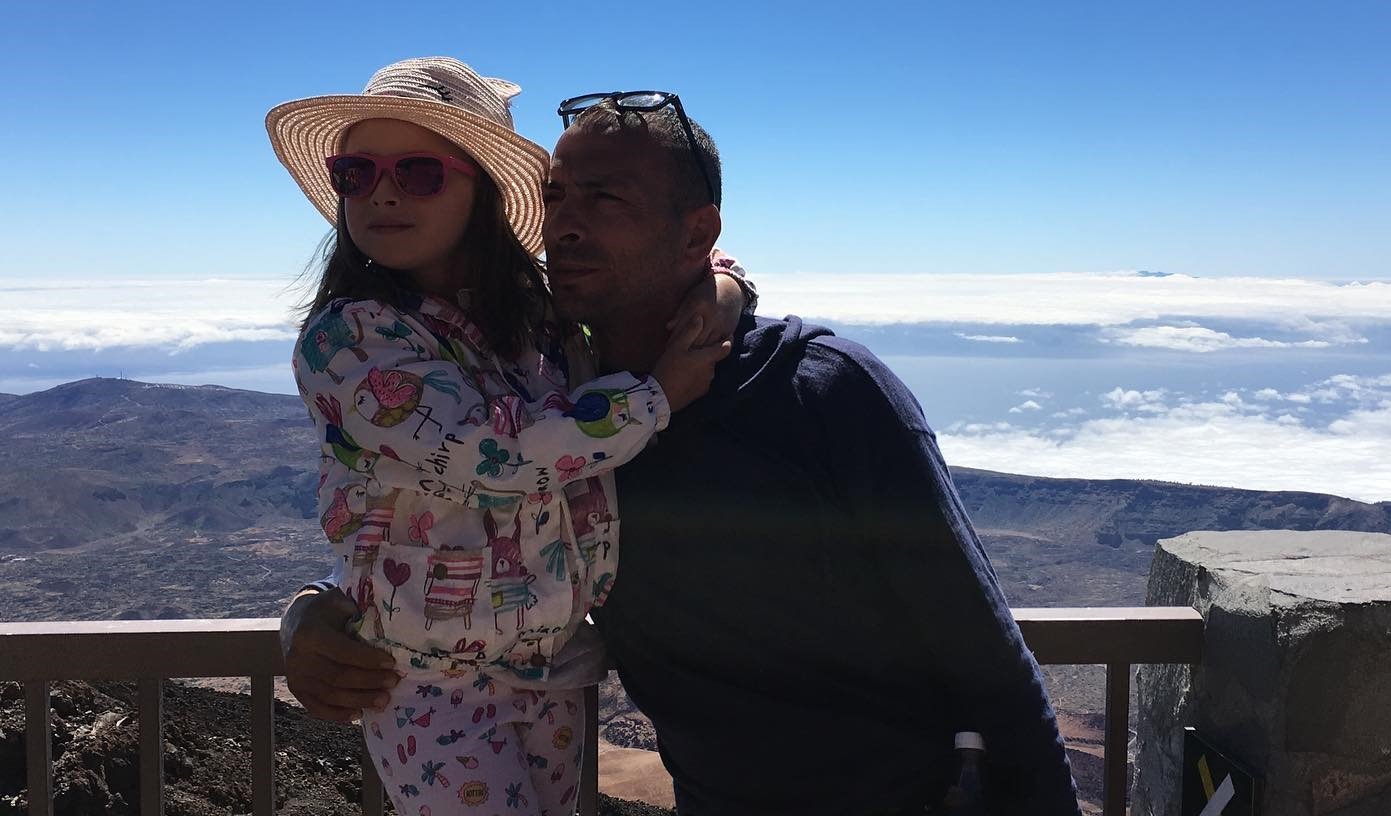 Teide Cable Car for families: let us clear your doubts!

Will you be visiting Mount Teide with your family in the near future?